Jean Batten – The Garbot of the Skies 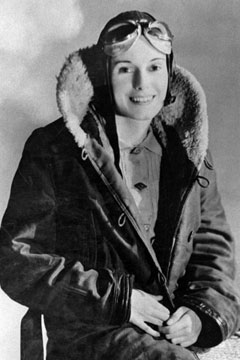 Jean Batten was New Zealand’s greatest aviator. Celebrated around the world for her heroic solo flights during the 1930s; she was also blessed with film star looks.

Jean held five world records for solo flying including England to Australia and the reverse trip. Her outward flight took 5 days 23 hrs, a record that had a long life.

Her last long distance flight from Australia to England was in 1937.

Feted everywhere she went, she had many wealthy suitors who had financed her journeys, one even buying her a plane.

Then came the war which disrupted millions of lives and Jean’s life was no exception.
After the war and for the rest of her life, Jean moved in and out of the public eye. Despite a few love affairs she never married, continuing to live and travel with her mother, Ellen. They followed the sun due to Ellen’s delicate health. In Jamaica, Jean became friends with Ian Fleming and Noel Coward. It was while they were in Tenerife that Ellen died in Jean’s arms on July 19th 1966. They were staying in San Marcos. Ellen was placed in a niche in the wall of the Anglican Cemetery in Puerto de la Cruz. Jean vowed that she would never leave her mother.

Three years after the death of Ellen, Jean started to enjoy world travel and recognition again, but she kept her base in the Avenida Apartments in Puerto de la Cruz.

In the decades that followed, she would occasionally resurface in aviation circles—lobbying for Concorde, visiting New Zealand and Australia, but all to do with aviation; life had lost its meaning for her. There were no more goals, no challenges, and no way in which to stand in the limelight again. She seemed to live only for her past, a past that, in the post-war years, no one remembered. The once supreme navigator had now lost her bearings. However, she cared about her image; she was not averse to having the occasional face lift.

Despite her vow, Jean decided to leave Tenerife in early 1982 and, after staying with her publisher and his wife in England, flew to Majorca where she intended to buy an apartment.

In a letter dated 8 November 1982 Jean advised her publisher of her new address. This was the last anyone heard from her. Her whereabouts remained unknown until September 1987, when it was revealed that she had died in Majorca on 22 November 1982. She had been bitten by a dog, and after refusing treatment had died needlessly from a pulmonary abscess. On 22 January 1983 she was buried in a paupers’ mass grave.

The man who unravelled the mystery was Ian Mackersey, a New Zealander, a journalist, who was making a video about Jean’s exploits. His book Jean Batten: The Garbo of the Skies is in the Library and it is an absorbing story of a young heroine who wanted to be alone – and got her wish.
If you want to buy a copy I would recommend eBay.
And if all fails, there is a video about the pre-war super star.

And yes, I did know Jean. I spoke to her often; even had coffee with her. Unfortunately, I never knew that she was the great Jean Batten or, I’m ashamed to say, I would have paid more attention to her. But, then again, she would not have been amused.