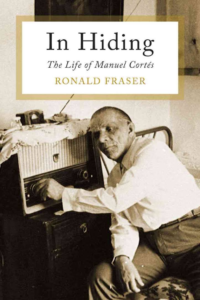 At the Library, we receive quite a few donations and they find their way on to the shelves by-passing the new books section. This book is one of them. I always say that books find me not the other way round.

“In Hiding” has an amazing story to tell about the young republican mayor of Mijas, in Andalucía, Manuel Cortes who, in 1939, found himself on the losing side of the Spanish Civil War. Instead of crossing the border into France like half a million of his compatriots, he decided to return to his wife and family and face the music, serve his time in jail, and then start his life again.

When he arrived home he found that some of his ex-colleagues in the town hall, on their return, had either faced the firing squad or been hanged. And he had been the mayor; one of the most wanted men in Andalucia. He had no choice but to go into hiding.

In 1969, thirty years later an amnesty was declared in the Boletin Oficial del Estado which pardoned all the alleged crimes committed during the Civil War and Manuel was able to come out of hiding and resume his life.

The thirty years in between has been faithfully copied by the Scottish historian, Ronald Fraser, one of the pioneers of oral history. Manuel, his wife Juliana and his daughter Maria are the protagonists of the adventure, telling their stories of pre-tourism Spain which were called the “Hungry Years” in Spain and leading us through to the end of their ordeal. Juliana shines like the Christmas star throughout the book.
After Franco died in 1975, Manuel was the founder of the local PSOE (Socialist party) and presided over it until his death in 1991.

As ever, I don’t want to disclose any of the incidents but I guarantee that this book is a fantastic page-turner. First published in 1972, our copy is a re-print in 2010.

In Hiding, is on sale on Amazon at a most reasonable price and will be back on our shelves pretty soon.