Many library members may recall that, until not so long ago, there used to be a Perspex-fronted shelf in the Classics section of the Reading Room that contained around a dozen books, with a small notice bearing the slogan “All that remains of the original Orotava Library”. The cataloguing of the library’s Special Collection is now, to all intents and purposes, complete, and has grown to contain a staggering collection of over 1300 books on almost every subject under the sun, the majority of which are inscribed “Orotava Library Dec. 1920”, 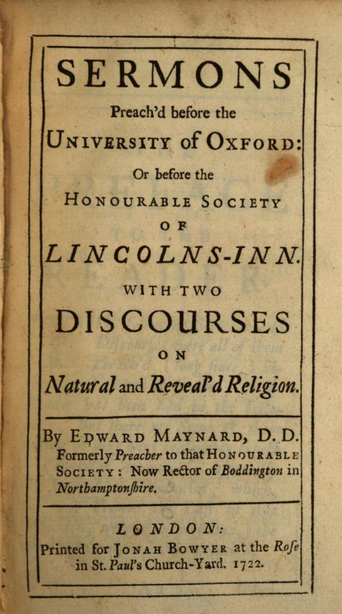 together with the signature of Mary Boreham, the library’s founder. With very few exceptions, all the books in this collection were published pre-1940, with most dating from the turn of the 20th century, and many much older: two books of sermons by Edward Maynard “Preach’d before the UNIVERSITY of OXFORD” were published in London in 1722 and 1724, and are the oldest books in the collection.

The original minute books of the library offer a fascinating insight into the origin of this collection. At the AGM held on 30th November 1920 it was reported that “the greater part of the late Mrs. Boreham’s books have been given to the library. Seven hundred of these are already in the library, and there are between 3000 and 4000 still to come. Anyone who knows anything about Mrs. Boreham’s collection of books will at once realise the great value of this gift.”

What a wonderful legacy!

The minute books also tell us that it cost the library the grand sum of 108 pesetas to move some of these books up from the port by horse and cart, plus a further 1169 pesetas to build new bookshelves in anticipation of future deliveries.

On 10th December 1920 the Committee was informed that “in consequence of the gift of the many books left by Mrs. Boreham, there are now many duplicates in the Library, [and the Librarian] was instructed to offer these duplicates to Mrs. Morris as a gift to assist the formation of a Library in Santa Cruz”. There is no indication of just how many books were donated to The English Club of Santa Cruz. When that establishment closed in 1935 around one thousand volumes were donated to the Royal Casino of Tenerife in Santa Cruz, which still holds them in their archive. The present librarian of the Royal Casino is in the process of making an inventory of these books, many of which contain both the Orotava Library and English Club identification plates. These would have been included in the original gift to the club. I also understand from her that there are quite a few books in the Casino’s collection that bear the bookplate and signature of Mary O A Boreham, and therefore part of the original donation.

So now for the big question: If Mary Boreham donated somewhere close to 5000 books to the library, why do we now have only just over 1300 on the shelves? This is still an impressive number, but the evidence would suggest that we have lost over three thousand books since the original minute book entry of 1920! We do not know how many “duplicates” were donated to The English Club of Santa Cruz, but probably a substantial part of those that were transferred to the Royal Casino in 1935. Sadly many more will have been lost due to worm damage, and a century of unavoidable wear and tear. Almost certainly some of the more valuable items that are no longer in the collection were sold to raise money for the Library. In her 1976 booklet on the library Annette Reid notes that “we have had a visitor from the Library of the British Museum, who identified a rare Latin book – he thought it was probably one of only two existent in the world. The book was later sold to the British Museum for a nominal sum”. Considering that it was likely “one of only two” it sounds like our little library was well and truly swindled by the UK establishment! During the late 1970s rigorous efforts were made to offload more valuable books from the collection, partly to pay for repairs and improvements to the building and services. In 1976 a list of “old books” was sent to Sothebys in London, but they replied saying that they were not interested. Three parcels of books (probably the same ones) were then dispatched to Francis Edwards Ltd. of London who eventually agreed to pay the library the princely sum of £32 – miserly even by late 70s standards! In 1978 the library received a visit from the Head Librarian of the British Council in Madrid, the idea being to advise on which books to keep, which to store until space became available, and which to destroy. Nothing seems to have come of this venture: the minute book only reports the guest’s comment that the biography section was “unnecessarily full” and that he was wined and dined by the committee at the library’s expense! No doubt over the years other books have been “lifted” by opportunistic visitors: a few years ago I received an email telling me that a German bookseller had recently sold a volume containing the bookplate of the Orotava Library and Mary Boreham’s signature!

Sadly I fear that one of the largest losses suffered by our wonderful collection of books has taken place in more recent times, and even during my eight years as a volunteer. In a library as small as ours, it is inevitable that books have to be “removed” every so often: the term “culled” seems gratuitously violent! Unlike the British Library in London, our own English Library does not have unlimited storage facilities, and as we acquire news books space has to be made somehow, and this is usually achieved by removing books that are either damaged or that have not been borrowed for an extended period of time. This is not an easy process: it is all very well to look at the date stamping sheet inside a book and decide to remove it because it has not been borrowed for six years, but authors come in and out of fashion, and who’s to say that Mills & Boon or Barbara Cartland will not suddenly have a resurgence in popularity in the future, and even become collectors’ items! After all, the careful preservation of books is how our library can boast a collection containing many volumes which date back over one hundred years. We are in the process of “thinning out” our biography section at the moment. The initial suggestion was to remove books about “flash in the pan” figures (pop stars, sports persons, etc.) in favour of established and historical celebrities, but who is to say that at some point in the future a volume on the Spice Girls will not be more highly prized than one on Sir Winston Churchill? I have no doubt that past “culls” have had disastrous consequences on the library collection as a whole. Fortunately, during my time at the library I have been able to rescue a number of volumes that were removed by (dare I say it?) unknowledgeable or uncaring past members of staff, with no concern for age, value or rarity. Now that I am Librarian I shall be able to ensure that this does not happen again, at least over the next few years.

The vast majority of the 1300 books now forming the Special Collection were once on the open shelves, and were available to be borrowed by all library members. However, due to the age, condition and rarity of many of these volumes the decision has now been made to restrict access to this collection in as much as it will not be available to borrowers, but may be consulted on the premises, and copies of pages made available to researchers upon request, and for a small fee. “How ridiculous!” I hear some of you say. “This isn’t the British Library. It’s an insignificant little library on a tiny island in the middle of nowhere!”. My reply to you is this: we may not have a first edition Shakespeare on our shelves, but the books that we do have are just as valuable to our community as a first edition Shakespeare is to the British Library!

With any luck one or two more volumes may resurface. We are still finding the occasional pre-1940 book mixed in with the travel and history sections, and haven’t even started on the reference section yet!

Happy reading to all our members!