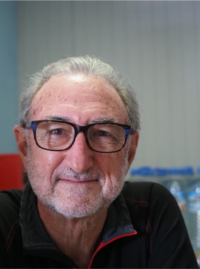 The book that I want to draw your attention to this month is a charming autobiography by a man of many parts who is extremely popular with our library members. Those who have attended his talks or joined him on his strolls through the town sharing his wide knowledge of the history of Puerto de la Cruz are always delighted to see him.

Ramon Michan Doña was born in Algeciras, Andalucía in the Peninsula, as the Canarians call the mainland of Spain. The title of his book refers to his grandfather, his father and himself. He tells how his family respected his wishes and encouraged him to study languages. Ramon’s destiny was to work his way up through the hotel industry until he reached his goal of becoming a respected hotel manager spending the majority of his working life in Tenerife, having noticed in the late 1960s that Tenerife would play a major role in the Spanish tourist boom.

His study of different languages and his experience of working in London, in 1968, brought him to Puerto de la Cruz and the new tower block Hotel Belair, an Aparthotel which had , become very popular in the tourist resorts by having some apartments privately owned and the majority of apartments run as a hotel.

To those of us who love our island, he brings back memories of the early years of the growth of the south into one of Europe’s major playgrounds.

Today, after his retirement from the hotel industry Ramon has taken groups to all parts of the island on carefully prepared walks sharing his knowledge of the places visited.

The last talk at the Library, just before the Covid pandemic, was about “The Cavendish Banana and a Murder” What do the two things have in common? Well, they don’t – and that’s what makes Ramon’s talks so interesting. Two for the price of one.

Ramon’s contribution to the Tourist Industry of the Island was recognised by the Centre for Initiatives and Tourism (CIT) of Puerto de la Cruz who awarded him a prize in 2017.  For those of you who live on the island the book is for sale at Stratford Book Shop in Calle Iriarte, Puerto de la Cruz.  It can also be bought as an e-book from atlantidadistribuciones.com 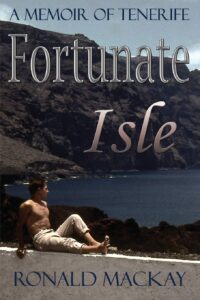 Many books have been written about Tenerife by historians and travellers but here we have a memoir written of a time when there were few British holiday makers visiting this lovely island.

Boatloads of islanders had emigrated to Venezuela, known as the Eighth Canary Island, to seek their fortunes. The year was 1960. Ronald Mackay, a young man of 18, stepped off a tramp steamer at Las Palmas and, after a series of mishaps, found himself in a small village, Buenavista del Norte, situated on the north-west coast of Tenerife. His idea had been to work his passage to South America but a year later he was still living in the village.

Ronald’s story is about his exploits with the local people. All the men in the village had nick-names and he became – “El Extranjero” – The Foreigner. The strangest name belonged to the Lighthouse-keeper at Teno – with the nick-name, “El Torrero” which would bring a smile to anyone’s face. The double “r” makes him the “keeper of the tower” not the bull-fighter.

Ronald quickly settles in and will put his hand to anything to help. In return the villagers give him work and friendship and his willingness to learn leads him to many adventures, one or two of them being on the wrong side of the law.

The book is thoroughly entertaining and beautifully written. The reader will learn a lot about village life in Tenerife; information which would never come from a tour guide. Ronald Mackay is a wonderful storyteller or should I say “El Narrador.”

If you are lucky enough to live on this island, why not take a trip to Buenavista del Norte and buy Fortunate Isle at one of the two bookshops there – Librería Juguetería Korakí or Librería Acuarela.

To all our friends and followers who are not fortunate enough to live here, but have a part of us in your heart, the book is for sale on Amazon UK.

To our Library members – you lucky people!

LAWRENCE and ME: KEN FISHER
Ken Fisher is the President and greeter of the English Library in Puerto de la Cruz, Tenerife. In 2019 a chance meeting with Ruth Hall led to plans to have Lawrence commemorated on a stamp. Here he explains more…

I was born in Derby and raised in Long Eaton and remember the Lady Chatterley Trial as though it was yesterday. I run a history group at the library, which is mainly a study group of the Anglo/Canarian connection from the 16th century to date.

After meeting Ruth Hall, I thought that we could have some fun with the life and times of Lawrence, and so I began preparing some notes of introduction to my group. But then Covid came along, and plans were put on hold. During the isolation Lawrence became an obsession. I think I’ve read almost every article about him on the web, especially JStor, and I certainly enjoyed the Digital Pilgrimage. To cut a long story short, I devised a daily task for myself, whereby I selected a postage stamp from a different country, printed the stamp at the top of an A4 and described for my classes the history behind the stamp. I now have a collection of 130 sheets.

With my new obsession for Lawrence, I found that he figured nowhere in the philatelic world which I think is a shame. I have searched the countries that he visited and found that Italy would probably be interested as he was full of praise when he left for the first time a hundred years ago. On top of this he had translated two books by Giovanni Vega, the Sicilian author, into the English language and written the foreword to a translation of a book into English by the Nobel Prizewinner for Literature, Grazia Deledda, the Sardinian 1926 Nobel Prize winner. Both these Italian writers had postage stamps issued in their honour in Italy.

I have now become a member of the D.H.L Society with the hope of pushing for a stamp of Lawrence to be printed in Italy or in America to mark the centenary of his death in 2030.